Its Christmas in just under a week and we’re excited. Not only are we looking forward to turkey, mince pies and mulled wine, weve enjoyed seeing some of our favourite brands capitalise on this time of year in a bid to make sales soar.

As the hype built around the infamous John Lewis advert, we took a strategic look at its competitors, how theyre joining in the festivities and how they fare against the rest.

Looking at John Lewis, Marks & Spencer, Aldi and Tesco, weve drilled down into the following areas:

First up its John Lewis, and what can we say, were not singing from the rooftops about how fantastic it is. We had high expectations, but it only scored 3.5/5. 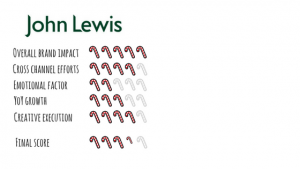 Arguably the most anticipated retail advert of the year, John Lewis has become the centre of Christmas for five consecutive years now but could this all be coming to an end? Overall, the hype and integration of the campaign across multiple channels was incredibly strong but we felt it fell short on the creative execution.

Google Trends data shows that they havent been able to beat themselves since 2014s Monty the Penguin and were not surprised especially when you compare the storylines side by side.

In 2014s ad we see a special friendship blossom between a young boy and a penguin but in this years, we have a young boy who forms a bond with a monster under his bed who then disappears. The narrative that is normally so strong just wasnt there this year, and we struggled to find the emotional hook.

However, as cross-channel marketing goes, we couldnt get enough of it! They have their own landing page where you can purchase the items in the ad, there is a monster maker to get the kids involved and its very own hashtag #MoztheMonster which began to trend in mid-November! 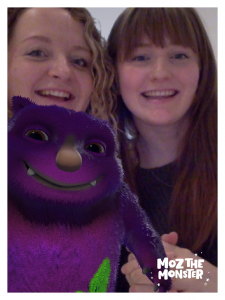 Up next is Marks & Spencer which scored an impressive 4.5/5. Theyve really upped their game this year and have even managed to integrate the storyline with their wider messaging spend it well that was unveiled earlier this year. As the data below shows, this years ad has had the highest level of engagement and the emotional hook is what we were searching for. 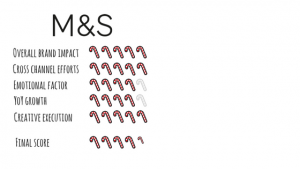 The story really encapsulates the spirit of Christmas and teaming up with Paddington in line with the anticipated Paddington 2 movie was a stroke of genius. This well-rounded ad is topped off with a landing page to showcase the products, a Twitter takeover by Paddington Bear himself and a hashtag #lovethebear. There were also in-store promotions, an print ad campaign and an impressive out-of-home campaign. However, the hashtag activity since the launch has fallen flat along with most of their already irregular social activity – sorry M&S, we still love your mince pies.

Next up its Aldi and they have found their muse. Kevin the Carrot was such a hit in 2016 with the cheesy heroes arent born, they grow, slogan that they progressed his story in 2017 in an orient express/titanic style advert (a little confusing we must admit) in which Kevin finds his true love. 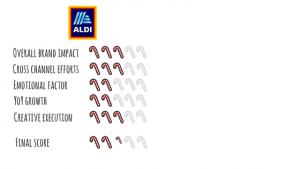 However, 2017s Google trends data shows that Kevin and Katie didn’t hit it off under the mistletoe, therefore only scoring a 2.5/5.

We dont think the ad has quite hit the spot on the storyline but it does do some things very well:

From a PR perspective, were not sure Aldi knew what they were getting themselves into when the cuddly toys sold out but its great to know that as well as focusing on consumers, its charity partner, the Teenage Cancer Trust is also benefitting. The coverage about the brand is fab but the connection with the over-priced selling on eBay may hit them hard. Perhaps they could keep their reputation by donating £1,000 to the charity when theyre sold on eBay.

Finally its Tesco, the only retailer in our list that features without a cartoon counterpart but thats why we love it, it really captures the essence of a Christmas at home with the family and scored a festive 3.5/5. 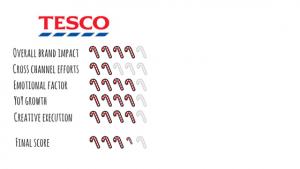 #EveryonesWelcome has strong activity on Twitter but unfortunately Tesco are duplicating content across Facebook too. Come on Tesco, you can do better than that! Theres also no dedicated landing page which couldve helped cement activity and push their wider sales strategy.

However, as the data suggests, Tescos ad has really resonated with its target audience sharing Christmas spent with family and friends. It also gives a realistic overview of Christmas rather than going for an aspirational look at the perfect Christmas.

Some havent taken too kindly to Tescos inclusive message which featured a Muslim family enjoying the festivities but Tesco hit back, arguing everybody should be able to enjoy this time of year.

Everyone is welcome at Tesco this Christmas and we’re proud to celebrate the many ways our customers come together over the festive season, a Tesco spokesperson said.

As part of a series of five short videos set to be released in the run up to Christmas, Tesco said the adverts aims to promote diversity.

Tesco said its Christmas campaign will celebrate the many ways we come together at Christmas, and how food sits at the heart of it all. Well done, Tesco, an excellent response.
So, our favourite? Its got to be M&S. It ticked all the boxes, integrating the story with online and offline marketing, resonating with audiences of all ages and the first supermarket to challenge John Lewis and succeed.